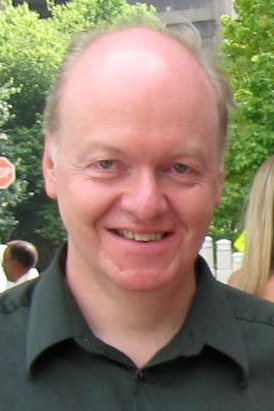 Colm Mulcahy is professor of mathematics at Spelman College, in Atlanta, where he has taught since 1988. He trained in algebra, and has also written papers on CAGC and wavelets. Since 2000, he has been at the forefront of publishing original "mathemagical" principles and effects, particularly in his long-running bi-monthly Card Colm for the Mathematical Association of America (MAA).

He tweets at @CardColm and blogs at the Huffington Post and at Scientific American, as well as at the Aperiodical. Some of his puzzles have appeared online at the New York Times.

He's particularly active in Gathering for Gardner and the associated Celebration of Mind initiative. He was fortunate to know Gardner for the last ten years of his life, and chairs the Martin Gardner Centennial Committee. He was also part of the team heading up Mathematics Awareness Month 2014.

A recent project of his has been the creation and curation of the free online Archive of Irish Mathematics and Mathematicians.

In 1997, Colm received the MAA's Allendoerfer Award for excellence in expository writing, for an article on image compression using wavelets from Mathematics Magazine (Dec 1996). His interests are broad, and include algebra, number theory, and geometry.

He earned a B.Sc. and M.Sc. in mathematical science from University College Dublin, in his native Ireland, and a Ph.D. from Cornell University for research in the abstract algebraic theory of quadratic forms, under Alex F.T.W. Rosenberg.