"If you want to make any progress in life, go as far as any sane person would go and
then keep going." John Horton Conway

32 mins video of JHC presentation on Triangle Geometry at "Long Live Geometry!" symposium at AAAS meeting in Philly, Feb 1998, organized by David Henderson and Colm Mulcahy (encouraged and fascilitated by Warren Page). Video restored by Daina Taimina. John's widow Diana reacted, "I love this, Thank you! This is EXACTLY how I choose to remember John".

Colm was fortunate to spend quality time with the late John H. Conway (1937-2020) about a dozen times between April 1995 (when JHC visited Spelman College) and August 2017 (at MoMath's MOVES conference in NYC), taking in a July 1999 trip to Glendalough (Ireland) along the way. 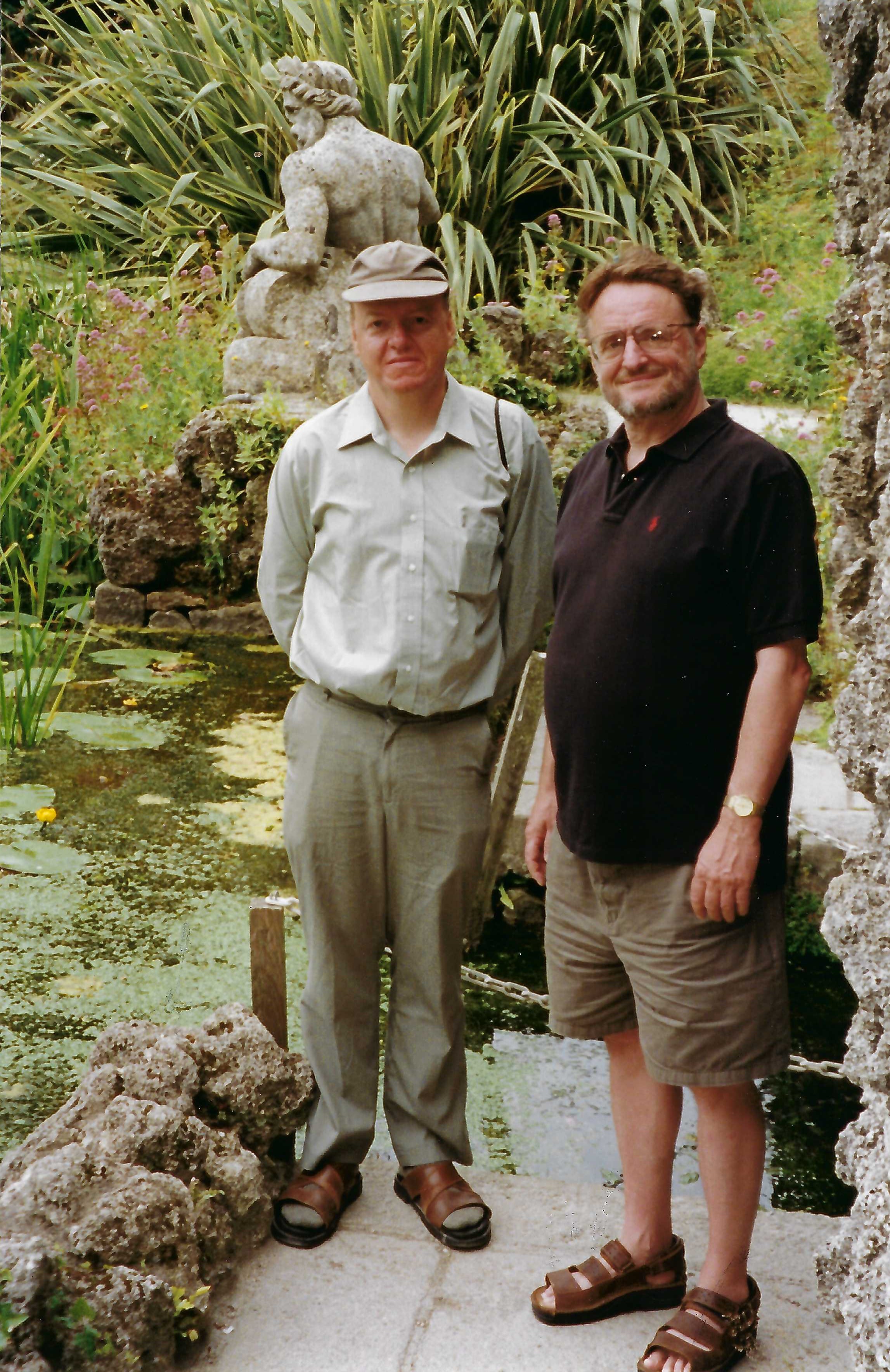 Wicklow, Ireland. Photo by Diana Conway, who remembers, "That was a lovely trip. I remember you driving us around twisty roads and suddenly a sheep would be taking a nap in our path. That amused me to no end! John really thought the world of you".

Numerous articles in MAA journals, written by and about John and his friend and collaborator Richard Guy (1916-2020), have been collected and shared here courtesy of Don Albers. 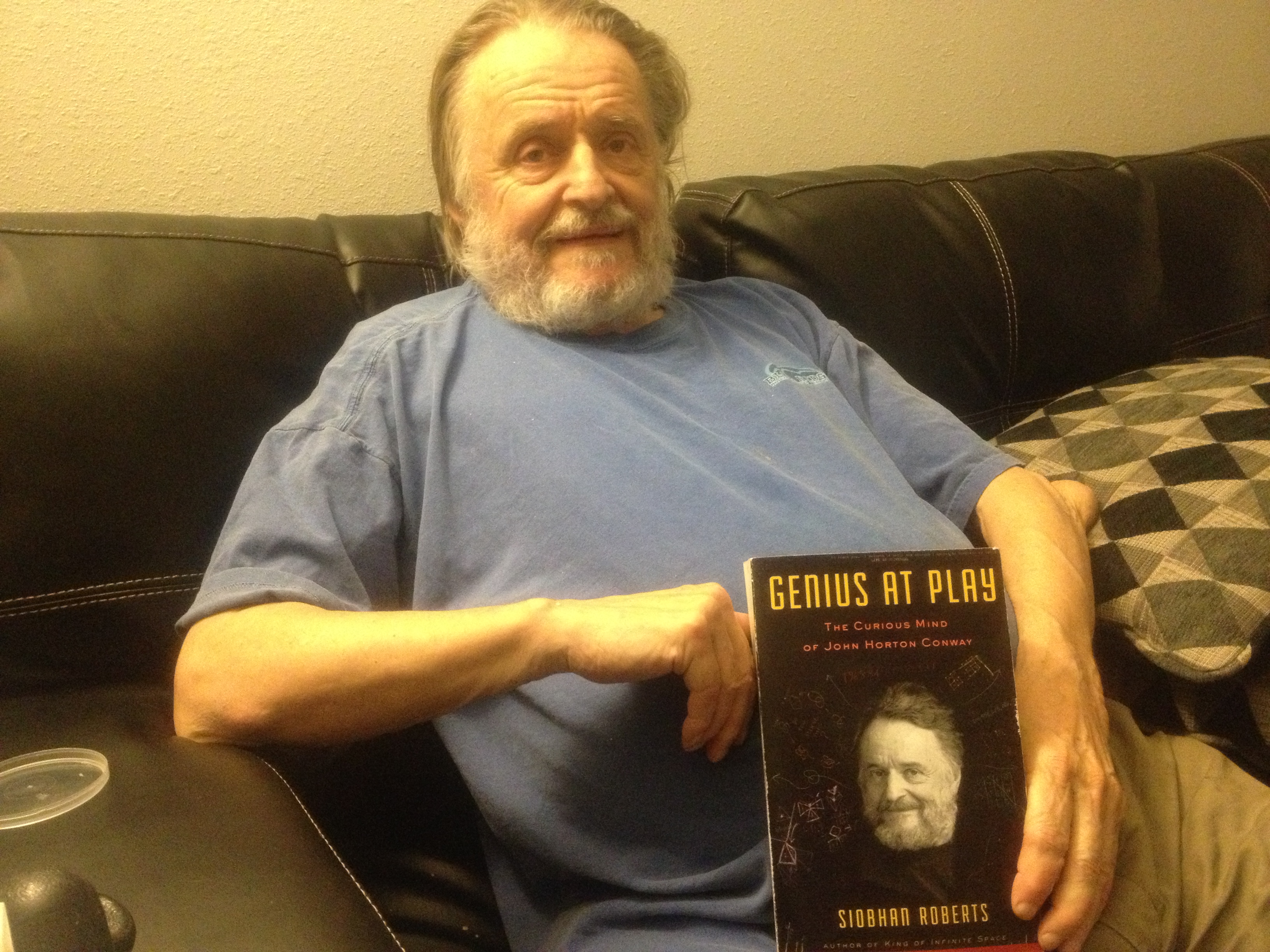 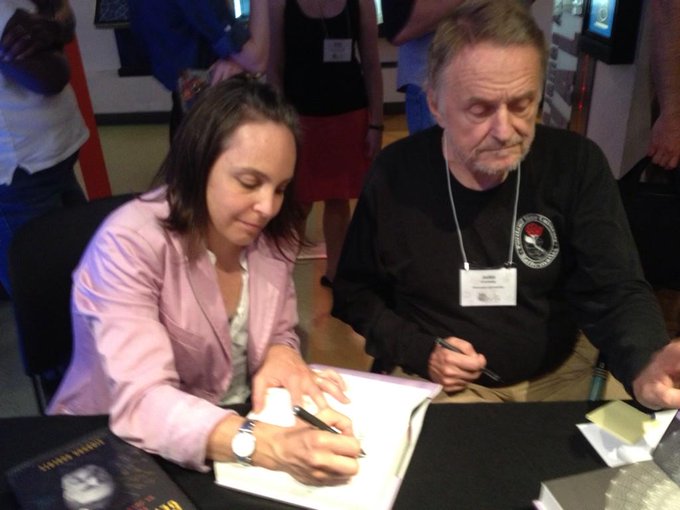 John Conway posed and solved problems in a great variety of mathematical areas, one knotty one was only recently solved by Lisa Piccirillo .

On 23 May, Nature published a Conway Obit by Manjul Bhargava. 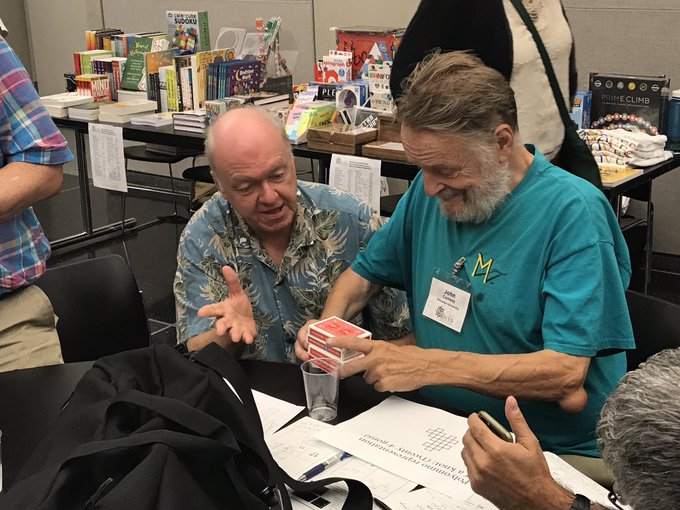 Conway was sometimes described as magical. Here he is enjoying playing with Gary Foshee's "anti-gravity decks of cards", at MOVES conference at MoMath in NYC, August 2017. (Photo courtesy of Ibrahim Dulijan.) He loved a good prank too.

Conway's Circle Theorem is a lovely and unforgettable observation that seems not to have been noticed by anyone before in history. It goes back to at least 2002. It is discussed in this Matt Baker blog, which in turn inspired distinguished geometer Doris Schattschneider to sit down and prove it. Her first proof from 28 April 2020 can be found in two parts: here and there. Matt praised its "aesthetic appeal, which is perhaps the one Euclid would have worked out had he noticed Conway's theorem himself. Well, better 2300 years late than never, I guess." (Matt has additional comments on the theorem below.)

On 4 May 2020, Doris shared a new proof which we highlight below, saying "It's much nicer and more convincing. One that I think Conway would have been more likely to produce." 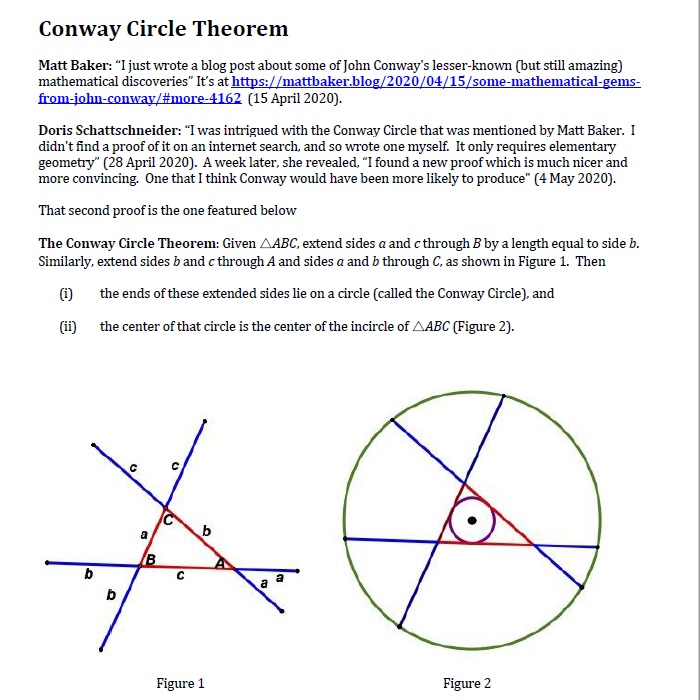 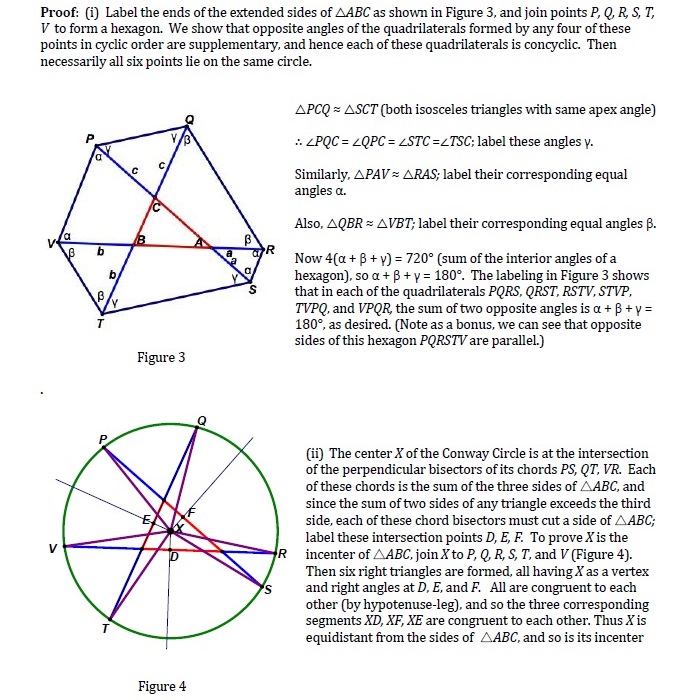 On 5 May, Alex Ryba shared a proof of his which he later added to and wrote up as shown here: 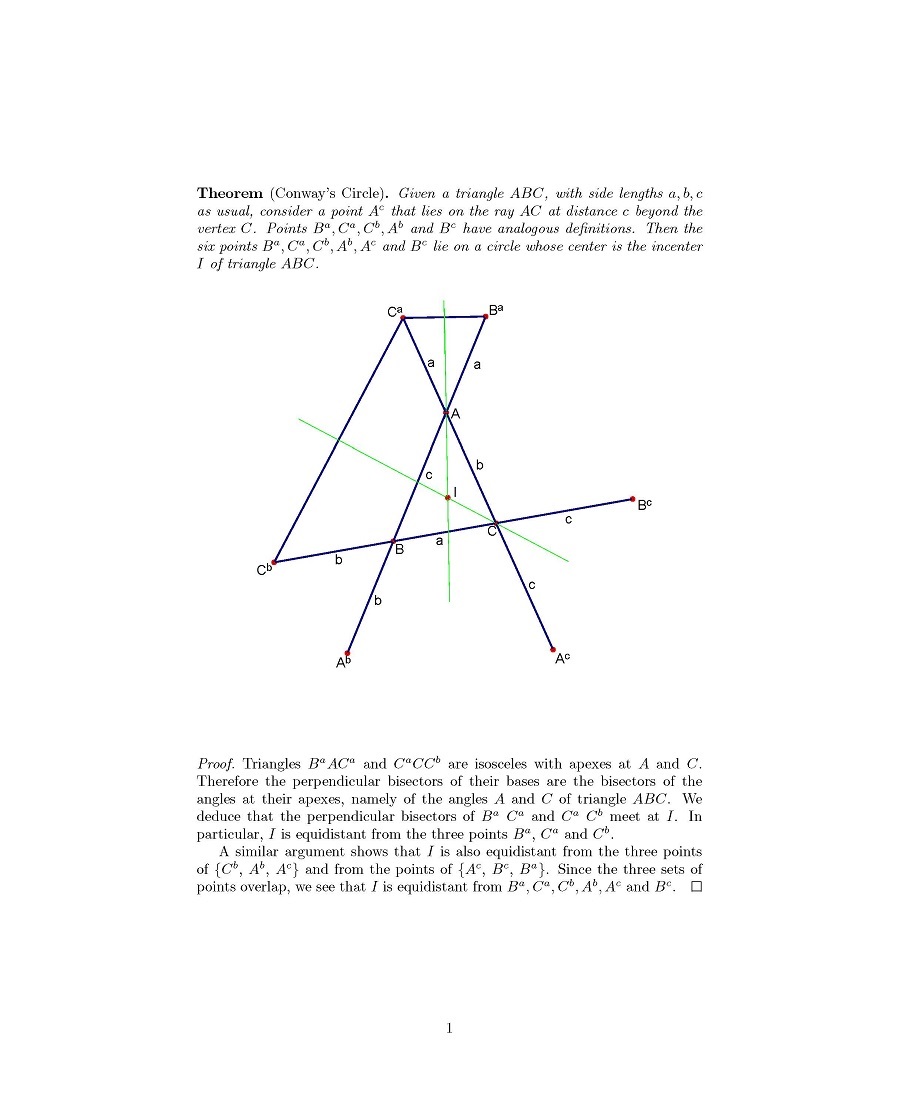 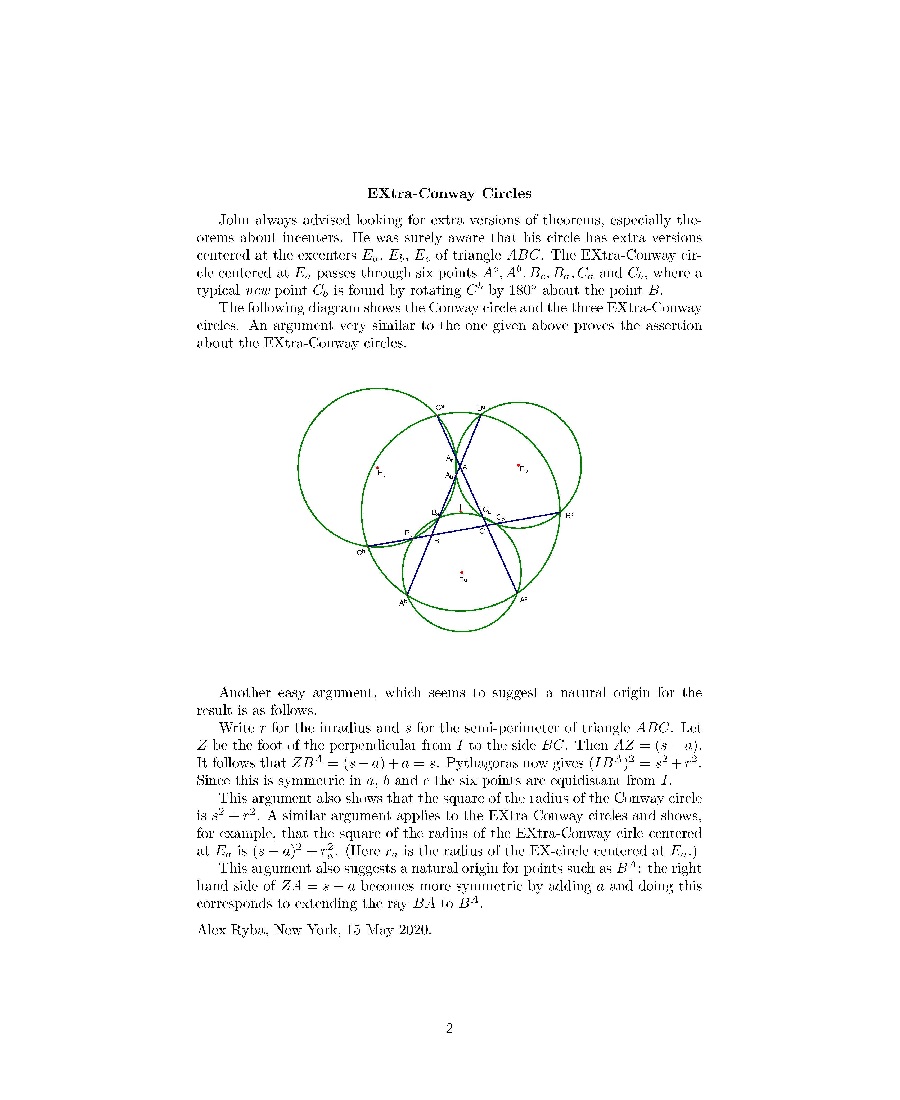 As for other proofs of this result predating the recent interest in the theorem, Matt adds: "A small amount of internet detective work turned up a 2013 paper by Francisco Capitán which does provide a proof of Conway's circle theorem, albeit in a rather indirect and non-elementary way. In fact, that paper establishes a generalization of Conway's result in which a certain set of six points is defined relative to an arbitrary interior point P of any triangle. These points are then shown to lie on a conic, and that conic turns out to be a circle if and only if P is the incenter of the circle (in which case the six points coincide with the ones Conway defined)."

On 7 May 2020, the Aperiodical ran a proof without words of the result contributed by Colin Beveridge. Matt Baker responded, "That's one of the most beautiful Proofs Without Words I've ever seen". An associated video (with words!) followed on 11 Jun 2020.

Morley's Theorem from 1889, which has over time been generalised, asserts that the points of intersection of the adjacent angle trisectors of any triangle form an equilateral triangle. Here is a lovely dynamic demo by Gábor Damásdi.

John Conway announced a simplified proof in 1995, which Alexander Bogomolny explains. Though it was in circulation for over a decade, it remained unpublished until 2009, when it apppeared in Martin Gardner’s Sphere Packing, Lewis Carroll, and Revresi (Cambridge University Press), an update of New Mathematical Diversions from Scientific American from 1966. Below is editor Peter Renz's Postscript of the material in Chapter 17 ("H. S. M. Coxeter"). Peter recalls, "I went over the final version of the ms with John in Princeton when I was returning from the Joint Mathematical Meetings in Washington, D.C., in January of 2009. He made several nice suggestions which I was able to work into the book before publication. This was the first publication of his proof of Morley’s Theorem." 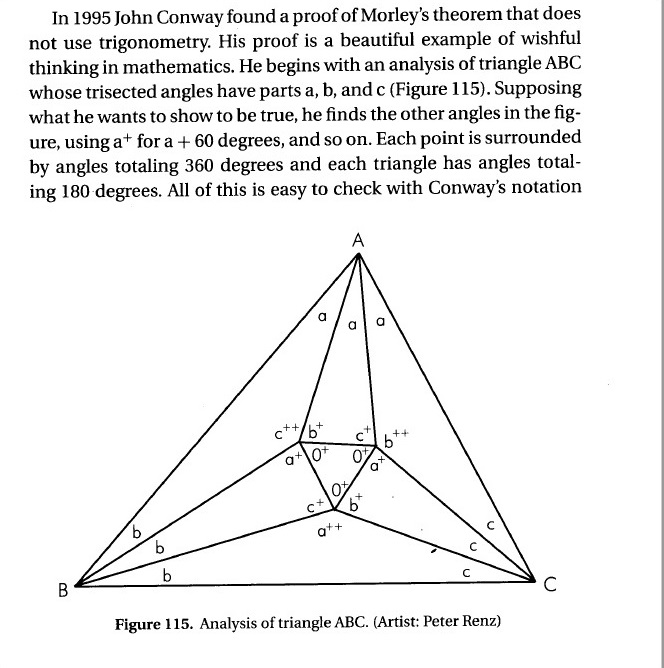 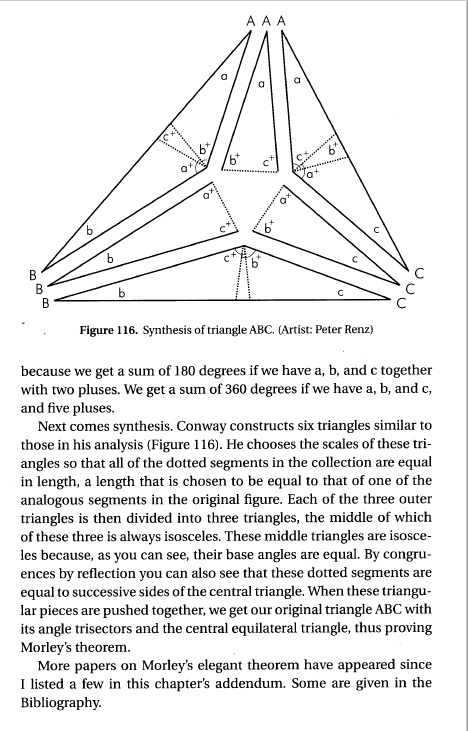 A few years later the Mathematical Intelligencer published John's take on it, illustrated with an obtuse triangle.